Tower of God Wiki
Register
Don't have an account?
Sign In
Advertisement
in: Characters, Rankers, High Rankers,
and 7 more
English

Arie Hon (아리에 혼, Ahrieh Hon, "Arie Hon") is one of the Great Warriors who entered the Tower with Zahard. He is the head of the Arie Family and a High Ranker, currently 5th in ranking.

One of the Great Warriors who pioneered the Tower alongside King Zahard, it is said that before entering the Tower, he challenged Zahard 10 times and lost 10 times; thus he became Zahard's servant.[5]

Arie Hon is known for giving special tests on his Floor and at some point after entering, Urek Mazino challenged the test and his task was to endure Arie's attacks for 10 minutes, but Urek fought evenly thus becoming the first person to ever successfully pass Arie Hon's special test.[1] Urek Mazino became the most famous Ranker in the Tower thanks to this opportunity. The reward from the Family Head was the transfer of control over one of the Floors in Hon's possession.[1]

The last person to pass the special test was his daughter, Arie Hagipherione Zahard, and the reward is still unknown. The rumor says it was a 'very personal and childish reward'.[1]

When he was visiting the floating castle of his family, Arie Hon was greeted by one of his sons Hoaqin, who expressed that he wished to become an even greater swordsman than he was. Amused, Arie Hon allowed Hoaqin to see the great Arie Altar. Hoaqin talked about how amazing it was and how he could only see it from the castle window as he was not a Regular yet. Arie Hon then commented that as this is his clan and floor, where many made buildings and sang songs for him, and only the Ha and Khun Families can compare to the great Arie Sword. He claimed that the blood and flesh of all of the Arie Family, be it the servants and even his wife and children, compose the great "Arie blade" that he towers as the ruler. He said that no matter how hard Hoaqin tried, he could never surpass his father here and said that he can either grow or sacrifice himself in his arms to become a part of his sword or leave and return as a demon if he truly wished to surpass him.

During yet another visit, Hoaqin asked Arie Hon if he meant he should become a ruler and train his abilities while looking after his subjects then return home. Hon then told his son that what he meant is that he sees the seeds of a demon inside him. He told Hoaqin that the best way for him to develop his power is to go to the lair of evil and use his rage towards Hon as fuel, growing his power by burning and devouring the souls of the weak. He then says that maybe Hoaqin is destined to fail and ultimately be incinerated, but that is what he was born to do. Hon finally tells Hoaqin to give into the pleasures and joy of murder, until everything seems pointless one day.

Arie Hon is the owner of the White Oar, the only sword made by Macseth. White Oar is known as the only S+ rank weapon inside the Tower. Warriors in the Tower say the well-edged weapon is 'like an oarfish' because of this. Macseth hasn't produced another weapon after the creation of the White Oar. The name of the sword is from Oarfish, a legendary White Steel Eel.[1][2]

Arie Hon is a fairly tall man with notably pale skin and long white hair that flows down his back and also covers the upper half of his face. On his right hip hangs his sheathed sword.

Arie Hon is known to be very temperate and elegant normally. He is also well mannered, even in a fight.[1]

However, Hon is shown to be a cold-hearted, blunt and straightforward father: When one of his sons, Hoaqin, told Hon he wished to become a superior swordsman to him, Hon, recognizing Hoaqin's desire as bordering on obsession that he identified as seeds of a demon, at first feigned fatherly affection while leading Hoaqin to the Arie Altar before quickly revealing his true intentions, ruthlessly stating that Hoaqin could never achieve his dream in his home and giving him the option to sacrifice himself to be his sword or leave his home and return as a demon if he really still intended to surpass him. After Hoaqin misunderstood what his father hold him, Hon unhesitantly corrected Hoaqin in that he literately saw that Hoaqin could become a demon and told him to go to a dark and evil place to develop his powers, use his rage towards him as fuel to increase his power by consuming the souls of the weak, and even coldly told Hoaqin to not deceive himself and just take joys and pleasures of murder, while stating that it was Hoaqin's destiny and he should do what he was born for even if he would fall and die. 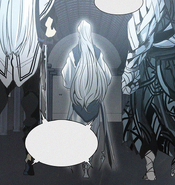 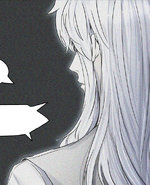 Arie Hon stays at the 100th Floor of the Tower as the head of Arie Family, and his territory is the largest of the 10 Great Families. He is famous for giving special tests to the Regulars with an extraordinary reward, but the level of difficulty is so high that most of the Regulars don't dare take them. To date, only two people are known to have passed his test.

He and Khun Eduan are said to be quite close to each other.[6]

Arie Hon is renowned as the strongest of the Great Warriors. He is an outstanding swordsman, who has no problem wielding a sword even in high densities of Shinsu due to his mysterious style of swordsmanship that is said to be impossible to describe in words.[1][5] He wields the White Oar, the only S+ rank weapon in the Tower. His power and skill was enough that when Urek Mazino took on his special test, they fought to a standstill for 10 minutes, but afterwards Arie Hon is known to have said "Urek Mazino is much better"; he has not fought anyone after fighting his daughter Arie Hagipherione Zahard.[1]