Tower of God Wiki
Register
Don't have an account?
Sign In
Advertisement
in: Characters, Females, Rankers,
and 8 more
English

Ari Bright Sharon (아리 브라이트 샤론, Ali Beulaiteu Syalon) is a High Ranker from the Ari Family. She is the Commander of the 1st Division of Kallavan's 4th Army Corp of Zahard's Army[1] and is a Second Tier Servant of Kallavan.

Ari Bright Sharon has fair skin, blonde hair and blue eyes. She wears a red cape over a white outfit. 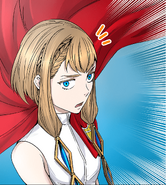 Ari Bright Sharon arrives at the 44th Floor with the 1st Division of the 4th Army Corp together with vice Commander Elpathion. She went with Khul Nissam Kay to greet Princess Yuri and introduce herself. She rejects Yuri's idea of going easy on the captured regulars as she stated that she's simply following the orders of Kallavan. Yuri asked her to be a part of the operation, and Sharon replies that she has to tell Elpathion about it.

After one of the warships exploded, a new group emerged from it and started causing mayhem. Vice Commander of 4th Army Corp, Elpathion, identified Evankhell as one of the attackers and moved in to confront her, with Ari Bright Sharon following at his side. Elpathion gave the command to subdue the runaway Ruler of the Second Floor. Sharon mobilized troops from her Division, personally took on the role of Fisherman, and started the attack. Using support from Spear Bearer Shakhul, she destroyed Evankhell's sword. Then she and Elpathion blitzed Evankhell together but to no avail.

Division Commander Sharon, Nyono Wan, along two unnamed rankers, and also Platoon Commander Yolker was seen to attack into Twenty-Fifth Baam's direction after Kallavan requested his servants to focus attack on Baam. However, Cha was able to block all their attack and protect Baam.[2]

Ari Bright Sharon favours a Needle in combat. She has displayed an extreme level of skill in using her needle when fighting against Evankhell, with the latter praising her abilities with the weapon.