This article is a stub. You can help Tower of God Wiki by expanding it.

Androssi is a fairly human-looking girl. She is said to be very pretty, as she is one of Zahard's Princesses, and has short brown hair. Her only non-human features are the small horn on the right side of her head and her yellow eyes. She wears a yellow dress with two red pins on it and often wears high heels, which sometimes gets her in trouble during combat. Androssi is currently one of the most popular Zahard's Princesses and she is said to be "milky white" by Ja Wangnan and Edin Dan.

She is haughty, but quite friendly most of the time, probably from spending time with Twenty-Fifth Baam whose actions such as going after Rachel appear to her as childishly naive. She was very ambitious and only thought of climbing even to the point of stepping on others. She is very self-centered, violent, extremely ruthless and didn't hesitate to betray "teammates" in order to climb higher in the Tower as seen in the Hide-and-Seek Test. She has good intelligence, but the emotional aspect always tends to be ahead, often resulted in impulsive actions. Compared to the realistic personality of Aguero, her teamwork and social skill are at the lowest of the worst. She will often ignore the team leader's instructions, do things of her own and make frequent surprises.

However, once she met Baam and through him the rest of the Regulars, she began to value friendship and loyalty. She is still very authoritative and good at taking control; similar to Khun Aguero Agnis. She seems to care about her appearance, as she was seen putting make-up on, even though being a Princess she is not allowed to date or marry. It is possible she does this just to make others more likely to obey her, or as Emile said, "A lonely girl who wants to love". She also likes to stand in front of cameras and TVs. Her behavior of wanting to be praised in the media can be interpreted as an act of expressing the inner desire to receive the pure and innocent affection (love), which she didn't receive from her deceased foster parents. She acts mighty and though on the outside, but she still has feelings. She hated Snake Charmer for killing her foster parents, although she didn't acknowledge it. However, the snake charmer still appeared as her Sworn Enemy at the Hidden Floor.

She retained her craftiness and cunning and was able to manipulate Ship Leesoo, although his thoughts were clouded when it came to FUG. She didn't retain her nicer personality that Baam brought out and became more self-centered after his "death". But still, she seems to care about her friends, judging from the way she planned to go after Viole after she heard about Khun's "death". 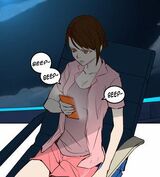 Androssi Zahard, Somewhere in the Workshop battle arc
Add a photo to this gallery

Retrieved from "https://towerofgod.fandom.com/wiki/Androssi_Zahard/Appearance_and_Personality?oldid=139533"
Community content is available under CC-BY-SA unless otherwise noted.