Anak shared many features with her daughter including brown hair, brown eyes, green skin and a lizard-like tail. Unlike her daughter, Anak had long hair that was tied in a long ponytail and an ample bosom.

She cared more about her own freedom than of her status as highlighted by the fact she freely decided to live life as an outlaw despite all the benefits she could have had, had she remained a Princess. When questioned about why her mother chose such a hard life, Anak said it was because she was happy (even though they fought every day) and because she loved the chicken pie that only her lover knew how to cook. She then said that her mother’s only misfortune was that she and her lover had been hunted down and killed. 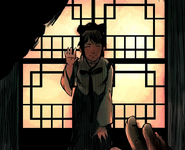 After being selected as a Princess, she rose quickly to become a Ranker. Her ability was acknowledged and she was bestowed with the Green April. It is possible she was a Fisherman, due to her use of the Green April.

However, soon she fell in love with a man who was a Palace cook. They secretly shared their love, but a problem arose when she became pregnant (which is forbidden for Princesses). She refused to give up the baby, so she and her lover ran away together and lived in secrecy, rearing the child. Zahard, after hearing such news, was furious and gave orders to find and execute her. In addition to violating the rules governing a Princess, she had gone missing with a weapon from the 13 Month Series, also considered a serious violation.

A squad of fighters from the Royal Enforcement Division, including Lo Po Bia Ren, discovered her location and killed her but she got someone (possibly Evan Edrok) to save her daughter and the Green April. Her lover was executed by another Princess whose identity is currently unknown.

Retrieved from "https://towerofgod.fandom.com/wiki/Anak_Zahard_(Original)?oldid=147646"
Community content is available under CC-BY-SA unless otherwise noted.