Excellent physical skills: Although Anak is not an actual Princess of Zahard, she is still related to one and so has some of Zahard's power in her, giving her enhanced strength and speed in combat. She is also extremely strong and resistant to blows. A single kick from Anak was enough to send Novick flying back as well as destroying the surrounding environment,[6] this is especially impressive since Novick is from a branch of the Ha Family who are renowned for their physical capabilities as well. She was also able to fight on par with Koon Ran, who was using Redan, in close range combat even after sustaining serious injury; their close range fight was strong enough to shake the entire Arena.[7][8]


Incredible Willpower: Anak's immense pride in her own power has been stated to be her greatest strength and also her greatest weakness. This pride can come across as arrogance, though she has stated that the reason she runs isn't because she is arrogant but it is because she 'can't'.[7] Also though she was badly wounded, to the point where even Koon Ran thought she couldn't get up, she managed to continue to the fight on par with Koon Ran.[7]

Shinsoo Enhancement: Anak can use Shinsoo to further enhance her combat ability. When using Shinsoo, she is able to jump huge heights and also gains enhanced speed and reflexes.

Shinsoo Usage: In Part II, she has been shown to be capable of using at least 4 baangs of Shinsoo at once.[9]

Green April: Anak formerly had the Green April in her possession and could Ignite it. In its ordinary form, the Green April is a long and sturdy hook that Anak uses very effectively. When Ignited, it becomes a huge whip-like weapon that can change its length and shape and even split into multiple branches. In the Crown Game she used it to such an extent against Laure that it rendered him only able to dodge.

Steel Spear: In Part II she possesses a spear that most E-rank Regulars cannot even lift. She wields it in conjunction with a reel and Reel Inventory. 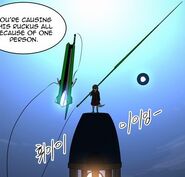 Steel spear
Add a photo to this gallery

Retrieved from "https://towerofgod.fandom.com/wiki/Anak_Zahard/Abilities_and_Powers?oldid=108354"
Community content is available under CC-BY-SA unless otherwise noted.