Akryung (악령, Ahkryeong; "Akryung"; likely 惡靈, meaning "Evil Spirit") is one of Headon's underlings who was assigned to help Rachel to get through the Tower. It is unknown what status he maintains in the Tower. It is assumed that he is also an Irregular.

Akryung is an extremely intimidating, imposing entity and, while his true height is unknown, he is roughly twice as tall as Rak Wraithraiser. Akryung wears garments reminiscent of feudal Japanese warlord clothing.

He is very mysterious, with a big built body and tall height. He has red skin and long black hair. He wears a helmet that covered his entire face, except his mouth. In the Tower of God: Part 1, he is completely silent, never speaking except for making a few cryptic chuckling noises. But in the Tower of God: Part 3, it turns out that he actually can speak. 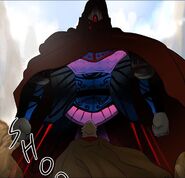 Akryung entered the Second Floor, along with 199 other Regulars, and teamed up with Androssi Zahard and Rachel with the three ultimately slaughtering them all.

Because of their unprecedented and shocking early appearance on the Floor, they were made to take part in the Crown Game, which was held in another test centre.[1] In the Crown Game, Akryung did nothing to either benefit or hinder Baam's team, merely standing beside Rachel.

For the Position Test, he was assigned to the Spear Bearer position and passed early by hitting an extremely distant target on his first try. During the final test of the Floor of Test, Akryung did nothing, with Khun leaving him to his own devices.

It was later revealed that Headon had "prepared him" so that Rachel would pass the first test of the Second Floor.[2]

Akryung appeared with Rachel's team on the 52nd Floor accompanying the Elder's Envoy. While Baam was meditating, Akryung attacked him from the back with Baam saying it is the strongest Shinsu he has ever seen from a C-Rank regular but Baam avoided it.

After a short fight, Baam is able to overwhelm Akryung and got him on his knees. Akryung then says Baam has gotten much stronger but will have to be even stronger to be able to defeat Zahard.

In Part 1, Akryung has never been seen in combat or fighting, but according to Androssi's judgment, he is very strong. This is proven by the fact that he was able to slaughter multitudes of Regulars in the "Deathmatch" Test[3] and was also able to hit an extremely far target with his spear on the first try.[4] During the aforementioned test, he was shown holding a bloodied cleaver, indicating he probably uses it in combat.

In Part 3, Akryung finally showed his power when he went to visit Twenty-Fifth Baam in The Cage. Akryung launched a surprise attack on Baam while he was meditating to re-charge his Shinsu loop ring, but Baam managed to dodge it. After seeing Akryung's power, Baam complimented Akryung's Shinsu power as the strongest of any C-Rank Regular that he has ever seen.