The Second Floor Administrator (이 층의 관리자) is the unnamed Administrator of the Second Floor. It resembles a gigantic grey eel, spiralling down into a smaller size. It first appears in the story when it makes a contract with Baam allowing him to use shinsu.

"But remember ye who climbs The Tower, this is not your power but your shackle. Always remember."[2]

Later, Baam returned, asking the Administrator to prepare a test specifically for an Irregular. In exchange, the Administrator granted Baam's wish of letting the rest of the Regulars pass even if he himself failed the exam.

The 2nd Floor Administrator interrupted the fight between Evankhell, and the servants of Kallavan. The guardian shoots a laser beam looking as it would kill Evankhell and Yu Han Sung, but actually teleporting them to Karaka's Heart.[3] 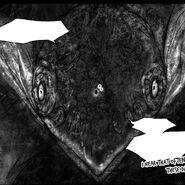 Retrieved from "https://towerofgod.fandom.com/wiki/2nd_Floor_Administrator?oldid=152020"
Community content is available under CC-BY-SA unless otherwise noted.