Episode 13
The Second Floor of the Tower, also known as the Evankhell's Hell or the Floor of Test is publicly known as a place to sort out dangerous individual to maintain the safety of the Tower.[1]

Long time ago, this Floor is used to conduct simple Tests like any other, but after the intrusion of certain Irregulars such as Urek Mazino and Phantaminum caused the incumbents of the Zahard Empire to feel insecure. In order to maintain their seat of power, the Zahard Empire then placed a classified High Ranker from one of the 10 Great Families as the Ruler and made this floor to function as an outpost where the High Ranker Ruler in charge will watch and sort out any "dangerous individuals", and if possible eliminate them out before they could grow to become a real threat to the Tower.[1] After Evankhell killed the Ruler from Zahard Empire, she took the ownership of this floor as its new Ruler.[2] Evidence of this can be seen on the symbol which still remains on the corner of the Evankhell's Mothership. When Evankhell become the new Ruler, she appointed her companion Yu Han Sung to help her manage the floor. It turns out, Yu Han Sung is secretly create a FUG hideout deep below the underground of the Wine Glass structure.[3]

The Wheat Field is the area full of vast wheat plants and rocky terrain. This is the area where the "Deathmatch" Test was held. 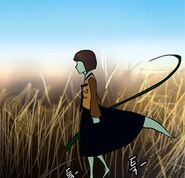