The Twenty-Eighth Floor of the Tower. On this Floor, the residents live in tall, blue, skinny skyscraper. The windows of the structure are all of equal dimensions. Outside these buildings are craggy wastelands, but the testing area in which Team Tangsooyook was in was abundant with flora and greenery.

There is also another kind of residential area that is the equivalent of the slums. This area is made up of tents, and is a place where Regulars are pushed out of sight of society for various reasons. The Hand of Arlen, once part of a great statue, is also located amidst the Tent Village.

Two years after The Hand of Arlen was destroyed, Team Tangsooyook climbed up to the 28th Floor and participate in the Hidden Legendary Food game as part of the floor's Test. After Team Tangsooyook defeated Team Chang, they stumbles upon a photo of a person who looks similar to Kang Horyang on the BOX, an information sharing platform for the Light Bearers.[1]

After Team Tangsooyook returned to the residential area, Horyang told the team that the person in the photo is Beniamino Cassano, his childhood friend and the real "Devil of the Right Hand". Horyang also shared his backstory of them being the only survivors of The Workshop's experiments to create Living Ignition Weapons and that the reason he started climbing the Tower again was to find him.

As the night falls, Horyang asked Jyu Viole Grace to meet him in private, just the two of them. It turns out that Horyang cannot wait anymore to find out whether Viole is also a Living Ignition Weapon like him or not. This is because the mysterious red exoskeleton that Viole showed back then on the 20th Floor.[2] Horyang also wanted to know if FUG had something to do with the experiment, but after hearing Viole's explanation, Horyang feel relieved that Viole is indeed a good person and already know Viole is not a person who would sacrifice other people Horyang then decided to quit from Team Tangsooyook and he will find Cassano by himself. Viole tried to persuade him to stay but Horyang insist to leave.[3] After travelling for awhile, Horyang arrived in the Tent Village where he met Xia Xia who worked as the information seller. Xia Xia then told Horyang that he could find the person he is looking for at the nearby location called The Hand of Arlen, which is located behind the tent village.[4]

Meanwhile, on the other side of The Hand of Arlen, Khun Aguero Agnis, Novick and Khun Ran also arrived to hunt Cassano. Due to a misunderstanding, Ran and Novick attacked Horyang because they think he is the target. After being cornered, Horyang retreated inside the statue, where Cassano joins the fight but after pretending to be beaten, he disabled Horyang by taking out his ignition power. At that moment Viole arrives with Xia Xia behind his back. The angry Wave Controller, incited by Xia Xia's accusations and Novick's half-hearted confession, takes on both of them by himself. The cornered and surprised duo tells him that the real culprit is hiding under the crumbled wall.

When Khun arrives, Xia Xia pulls out a detonator, threatening to blow the whole place up. She informs Viole through her lighthouse that she's with FUG and if he doesn't go with them both Khun and Horyang shall die. Khun, who doesn't buy Viole's cliché villain act, asks him why is he letting them go since this trap was clearly designed for him.

As Viole, ignoring his question, turns around to leave, Ran and Novick step into action and attempt to secure the detonator, but are stopped by Viole's Fast Skip technique what surprises everyone around, especially Khun. Viole returns the detonator, quietly saying that if she pulls a stunt like this again, her fate will be death. In that moment, the crazy woman pushes the button, detonating all charges with a glorious speech about the birth of the new slayer.

Viole screams at Khun from behind the forming barrier to run away from this trap, but his friend, who's still paralysed by the shock of finding out that Viole is Baam, is caught up in the explosion. Afterwards Viole, who's vented his anger and sorrow on the suspendship, convinces both parties to join forces, secretly telling Ran that there's a possibility that Khun survived.

Meanwhile the rest of Team Tangsooyook arrives at the ruins of the Hand of Arlen and find the injured Khun at the place where Viole left his Pocket. After nursing him back to health, Khun and his saviours set out for the 29th Floor to find out what fate the rest of his team has met during the events at the Hand of Arlen... 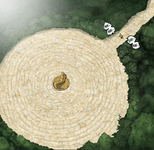