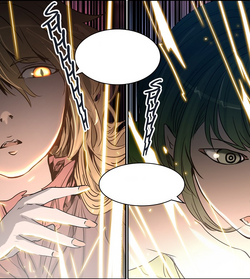 The Thirteen Month Series (13월 시리즈, 13 wol shirijeu; or "13 moon series") consists of an Arms Inventory and 12 sentient Ignition Weapons made by craftsmaster, Ashul Edwaru. They are bestowed by King Zahard to a former Princess, making their symbolic significance greater than any other item or weapon in the Tower.[2][3].

The 13 Ignition Weapons, when ignited by the user, release vast amounts of power. It is said that only a formal Princess is supposed to be able to ignite a 13 Month Series,[5] though Regulars such as Anak Zahard and Twenty-Fifth Baam have proven this to be untrue.

Depending on the weapon's personality, it may refuse to listen to its owner no matter how skilled they are. Because of this, it is impossible to force a 13 Month Series to ignite against its will. Once such case arose when Baam managed to ignite Black March while its owner Yuri Zahard had been unable to do the same despite being a formal Princess. When weapons of the 13 Month Series are in close proximity to each other, they will resonate and their owners can feel it.[6]

It is revealed by Garam Zahard on the 43rd Floor that when the Thirteen Month Series are combined together, they would form half of the Key of the Tower that will unlock the floors beyond the 134th Floor. She claims that the day Zahard announced that he would stop climbing the tower, he split the Key into two parts. He gave the first half of the Key to the blacksmith Ashul Edwaru, who melted half of the Key and turned them into the 13 Months, which Zahard then made the princesses fight over.[7]

According to Garam Zahard, The 13 Month Series were split up amongst Zahard and his 12 companions.[8] At first, they were intended to be shared between King Zahard himself and his 12 most trusted companions to help him to safeguard the key. These 12 companions are:

However, when two of Zahard's companions, Arlen Grace and V later, declared war against him, Zahard immediately cancelled the sharing of the 13 Months Series.

Many years after the great war between Zahard against Arlen Grace and V ended, Po Bidau Gustang, one of Zahard's companions, who had become family leader of one of the 10 Great Families, proposed the creation of Zahard's Princesses system. This system forced the princesses to compete against each other and fight over the 13 Months Series, to prove themselves as "worthy" to become "Acknowledged Princesses." The official purpose of this bloody contest is to declare whichever princess collects all 13 months as Zahard's wife and bear his child, but the reality of the princess system is much darker. It is later revealed by Garam that Zahard would use any means necessary to prevent any princesses from gathering all the 13 months.[8] It seems that Zahard has absolutely no intention on marrying a princess, and only agreed to this proposal because it would help him keep the 13 months in the hands of the Zahard Empire, ensuring their safety from the wrong hands.

In order to continue the contest indefinitely, Zahard employed a few tactics to prevent any princess from gathering all 13 months. One such method is the intervention of the Ghost of the 13 Months. The Ghost was apparently a former first generation princess candidate who failed in the initial selection stage. The ghost resented the other princesses and made a deal with King Zahard to seep into the spirit of 13 months and torment the princesses. The ghost would steal and take control of the bodies of those who ignited more than two of the 13 months and make them do her bidding. When the princesses are possessed, they went on a rampage. Zahard would then make their "rampage" an excuse to execute and kill the princesses, which has resulted in the death of over five princesses to this method. The ghost cannot possess the princess' body for a long time, limiting her possession to only one week.[8] The first generation of Zahard's princesses were all consumed by this evil magic and ended up hating and killing one another.[9]

A Princess who has climbed the Tower and become a Ranker might be chosen to become a formal Princess, also called a "chosen Princess".[10] Only such Princesses are eligible to receive a 13 Month Series,[10] as they has proven their ability by climbing the Tower.

When a formal Princess accepts one of the Series, she must abide by a set of rules:

The following consist of a list of the 13 Month Series, along with their previous and current owners. [12][13]